Connect to databases for Massachusetts residents at http://www.bpl.org/electronic/.

Office hours in New Africa House suspended until further notice. But I can meet you on Zoom or other online venues.

To request an online appointment or get any other help, please use this form. 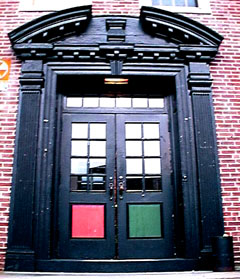 (Door of New Africa House some years ago)

Black Abolitionist Papers Papers and articles of 300 US and European anti-slavery activists of color, 1830-1865.

Ethnic NewsWatch Full-text articles from the newspapers, magazines and journals of ethnic communities in the United States, 1965-present.

HATHI Trust Digital Library A gigantic collection of books and periodicals digitized by Google, Internet Archive, and member libraries. The entire corpus is searchable within the HathiTrust catalog, although only out-of-copyright books are available to read. Generally, this is books published before 1923 or by the government. UMass Amherst users can create accounts, assemble their own sets of texts for analysis, and  print and download.

Academic Search Premier A multidisciplinary database with many literature, linguistics and anthropology journals.

Arts and Humanities Citation Index In ISI Web of Science, an index to scholarly journals which can be searched by topic, author, source, address or by cited reference. Good resource for academic book reviews.

Black Studies Center combines several resources for research and teaching in Black Studies: Schomburg Studies on the Black Experience, International Index to Black Periodicals (IIBP), The Chicago Defender, and the Black Literature Index. IIBP provided indexing and abstracting of 150 African, American and Caribbean periodicals, with full text of forty core journals. The Chicago Defender was at one point the most widely-read black newspaper in the country, with more than two thirds of its readership based outside Chicago.

Book Review Digest Citations, abstracts and excerpts of reviews of books, as published in periodicals.

Dissertations and Theses Citations and abstracts of doctoral and some maters theses, mostly completed in colleges and universities of the United States and Canada. Full text access to UMass dissertations.

ERIC  Articles and reports dealing with issues in education.

JSTOR Full-text articles from scholarly journals from many disciplines. From the earliest issue of each journal to between two and five years prior to the present. Therefore, does NOT contain very recent scholarship.
Web of Science Allows multidisciplinary searches combining arts, humanities, social science and science. Good for seeing who cited whom. Good for academic book reviews.

Most of these are located on the Main floor of the W.E.B. Du Bois Library. 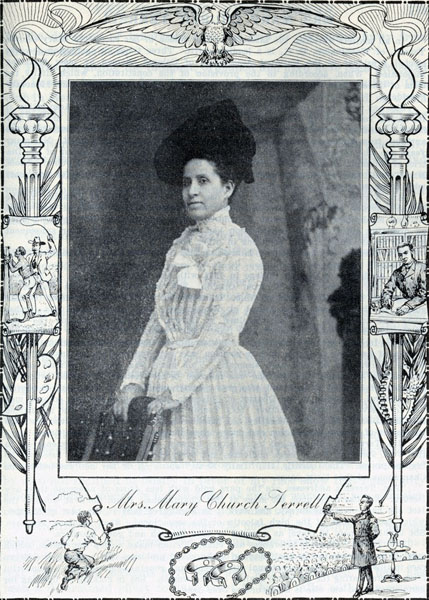 Mary Church Terrell, "What Role Is the Educated Negro Woman to Play in the Uplifting of Her Race?" in Twentieth Century Negro Literature, Or a Cyclopedia of Thought on the Vital Topics Relating to the American Negro, ed. and arranged by D. W. Culp (Naperville, Ill.: J. L. Nichols, 1902), pp. 172-77. 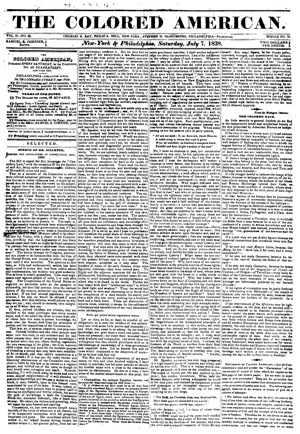 On January 7, 1837 Phillip A. Bell began to publish a weekly newspaper called Weekly Advocate. From the beginning, one of the major goals of this newspaper was to educate its subscribers, and much information appeared in a list format including: principal railroads, lengths of rivers, heights of principal mountains, principal colleges in the United States and the principal features of various countries of the nations of the earth.

On March 4, 1837, issue number 9 of the newspaper was published under the new name of The Colored American, with Samuel E. Cornish as editor. The new motto was “RIGHTEOUSNESS EXALTETH A NATION,” and the paper was “…designed to be the organ of Colored Americans—to be looked on as their own, and devoted to their interests—through which they can make known their views to the public—can communicate with each other and their friends, and their friends with them; and to maintain their well-known sentiments on the subjects of Abolition and Colonization, viz.—emancipation without expatriation—the extirpation of prejudice—the enactment of equal laws, and a full and free investiture of their rights as men and citizens…”

From the database African American Newspapers: The 19th Century

For your convenience, we recommend that you request microforms through the Electronic Request Form before coming to the microforms area to do your work. When filling out the electronic form please list a specific call number along with a specific reel number, if applicable.