Library Guide by Isabel Espinal for 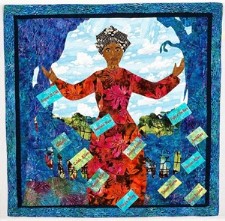 Survey of African American Literature I

Use RefWorks to keep track of your research.

1. Set up your account by clicking on the RefWorks link on the library homepage. From the RefWorks info page, choose "RefWorks Login & New Account Set up." From the login page, choosse "New to RefWorks? - Sign up for an Individual Account." Note: You get to choose your own username and password - make them easy to remember!

2. Get your book citations into RefWorks

4. Print out your bibliography

If you need more help or info on RefWorks, check out the FAQs.

The Museum of African American History is New England’s largest museum dedicated to preserving, conserving and interpreting the contributions of African Americans. In Boston and Nantucket, the Museum has preserved four historic sites and two Black Heritage Trails that tell the story of organized black communities from the Colonial Period through the 19th century.

TIP: When you look for a particular book on the shelf, make sure to browse the shelf and nearby shelves for related books. Take your time! Open the books!

Art Abstracts An index to articles and reproductions of works of art in art-related magazines, journals, yearbooks, and museum bulletins.

JSTOR Full-text articles from scholarly journals from many disciplines. From the earliest issue of each journal to between two and five years prior to the present. Therefore, does NOT contain very recent scholarship.

"Florence’s Historic African American Community ~ By 1850 the small village of Florence (then Bensonville), counted among its population a higher percentage of African-Americans than nearby Springfield or even other strongly abolitionist Massachusetts communities in New Bedford and Boston. Many members of this significant if short-lived historical community were self-emancipated former slaves. Others like Sojourner Truth and David Ruggles were among the nation’s leading black activists in the struggle to end slavery."