“Pride and Passion: The African-American Baseball Experience,” an exciting new traveling exhibition displayed on the Lower Level of W.E.B. Du Bois Library at UMass Amherst from October 12, 2012, to December 7, 2012, examines the challenges faced by African-American baseball players as they sought equal opportunities in their sport beginning in the post-Civil War era. 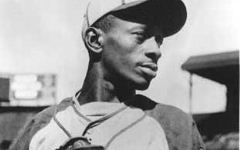 Programs for the public in connection with the exhibition:

Saturday, Oct. 13, 1:00 pm, Jones Library, Amherst: “The Mighty Jim Crow has Struck Out! The Story of How a Small New England Town Embraced the African-American Ball Player,” a talk by Dan Genovese. The author of two books about 19th century baseball in Western Massachusetts, The Old Ball Ground: The Chronological History of Westfield Baseball, Vol. 1 and The Old Ball Ground: Volume 2: Town Teams & Bush Leaguers, Genovese is captain and co-founder of the Westfield Wheelmen Vintage Base Ball Club.  He is also the author of Rough House, a look at professional basketball in the early 20th century. Genovese was born in Westfield and has played all levels of baseball in Westfield from Little League to college to Vintage Base Ball. He is a member of the Society for American Baseball Research (SABR). The event is co-sponsored by Jones Library and UMass Amherst.

Thursday, Oct. 25, 4:00 p.m., Lower Level, Du Bois Library, UMass Amherst: “Raceball: How the Major Leagues Colonized the Black and Latin Game,” a talk by Rob Ruck PhD, Senior Lecturer in the History Department at the University of Pittsburgh. The event is also an opening reception for the exhibit “Pride and Passion: The African-American Baseball Experience.” Ruck is the author of Sandlot Seasons: Sport in Black Pittsburgh, The Tropic of Baseball: Baseball in the Dominican Republic, Rooney: A Sporting Life and the recently released Raceball: How the Major Leagues Colonized the Black and Latin Game. His documentary work includes Kings on the Hill: Baseball’s Forgotten Men, which won an Emmy for Cultural Programming, and The Republic of Baseball: Dominican Giants of the American Game. He was on the committee that elected eighteen players from the Caribbean and the Negro Leagues to the Hall of Fame in 2006 and recently served as an advisor for Viva Beisbol, the permanent exhibit on Latinos at the Hall of Fame in Cooperstown, New York.

Thursday, Nov. 8, 4:00 p.m., Lower Level, Du Bois Library: “Effa Manley, the First Woman Elected to the Baseball Hall of Fame,” a talk by Doron Goldman. A former lecturer in the Mark H. McCormack Department of Sport Management at UMass Amherst, Doron “Duke” Goldman is currently a baseball historian and presenter as well as an elder care researcher.   At UMass Amherst, Doron taught a course called “Baseball: Myths and Legends.”  A longtime member of the Society for American Baseball Research (SABR), his interests are the Negro Leagues and baseball’s integration, as well as baseball’s role in the ongoing struggle for social justice in America.

Thursday, Nov. 29, 4:00 p.m., Lower Level, Du Bois Library: “Red, Black, and Green: The Red Sox, Race and Pumpsie Green,” a talk by Rob Weir. Weir has published four books on the American labor movement: The Changing Landscape of Labor (with Michael Jacobson-Hardy); Beyond Labor's Veil: The Culture of the Knights of Labor; Knights Unhorsed: Internal Conflict in a Gilded Age Social Movement; and The Historical Encyclopedia of American Labor (with James Hanlan).  Weir is a lecturer of history at UMass Amherst and has taught at Bay Path College, Mount Holyoke College, Smith College, and Mount Ida College, and was a senior Fulbright scholar in New Zealand.

Books From the Five College Catalog

This is a very small sampling of titles that are available in the Five College Catalog.

UMA WorldCat - a discovery tool that helps you find a wide range of materials using a single search. Books, journals, articles, videos and more can be located.

For even more historical databases, get a free eCard from the Boston Public Library.

The Boston Public Library (BPL) and the Massachusetts Board of Library Commissioners offer all Massachusetts residents remote access to proprietary databases. Includes:

What articles are prominent in my field?
2-minute video on using "Web of Science" to find highly-cited articles.

Academic journals are great for browsing, keeping up to date with research trends, and getting ideas.

They show what scholars in History and African American and Women's Studies are writing about today (and in the past if you go to the back issues).

They also give you an idea of how scholars in History and African American and Women's Studies write.

Black Ball: A Journal of the Negro Leagues