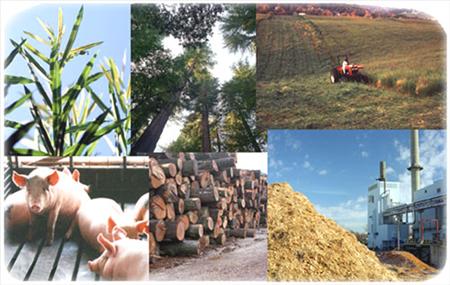 Biomass energy provides plant powered heat, electricity, and transportation fuel. Plants absorb and store energy from the sun as they grow. With the right technologies and careful attention to responsible land-management practices, the energy contained in plants can be harnessed to produce heat and electricity.

Biomass energy can be created in a variety of ways. The largest source of energy from wood is "black liquor," a waste product from processes of the pulp, paper and paperboard industry. Waste energy is the second-largest source of biomass energy that is mainly created from municipal solid waste (MSW), manufacturing waste, and landfill gas. Finally, biomass can be turned into transportation fuels such as ethanol.

Ethanol and liquid transportation fuels--often referred to as "biofuels"--have received a flurry of attention from administrative policy makers in recent years as 30 percent of greenhouse gas emissions come from the transportation sector. However, as the science and understanding surrounding these biofuels grows we have come to learn that corn based ethanol and soy based biodiesel, so-called "first-generation" fuels, have considerably lower greenhouse gas reduction potential than "second-generation" fuels such as cellulosic ethanol, or even "third-generation" algae based fuels. There are also concerns regarding competition between these first generation fuels and food crops which contributed to the global food crisis during the summer of 2008. In fact domestically, nearly one-third of all corn planted will be used to create biofuels rather than food.

While biofuels can reduce greenhouse gas emissions we must consider the full range of impacts their production entails including land use changes and affects on food production and prices. Ultimately, truly sustainable biofuels have a role in a clean energy future but we need to be very careful that misguided policies and mandates do not create costs that outweigh their benefits.